"The Crossroads of America' signifies the importance of waterways, railroads, highways and other transportation facilities in the state, viewed by many as some of the finest in the nation."

Back in the 1980's, the State of Indiana had a big tourism promotion.  They came up with the slogan "Wander Indiana" and then publicized it, to the point where it appeared on Indiana state license plates. The slogan was the cause for some derision, as a lot of people thought the plates looked like we were from the State of Wander. I thought of this today as I downloaded some photos I took yesterday doing just that-- wandering Indiana.

My husband and I decided yesterday that it was such a wonderful day weather-wise, we ought to take advantage of our newfound retirement freedom and go out and enjoy it. We hopped in the car and headed to northern Indiana Amish country-- about a 3 hour drive.  I had read some great information online about the Arts and Earth Heritage Trail that roams through the area with lots of unique shops in a rural setting.

Off we set, avoiding interstate roads in favor of red and gray roads (look on your map... the red ones are the roads that are divided and have a median, the gray roads are two lanes, usually  county roads. It was on the gray roads that we saw many Amish buggies and beautiful whitewashed farms. We stopped in 5 or 6 towns and at little businesses along the way. The Yoder Popcorn store, Country Lane Bakery, a quilt store, an old Dime Store... just places to nose around (in the case of the popcorn store and the bakery, "nosing around" meant literally enjoying the wonderful aromas of the products sold there!) We came home with some hand thrown pottery, a bunch of different kinds of candy, two kinds of cookies, some bread and dinner rolls, a bottle of home made salad dressing, limburger cheese (oh yes... it is FABULOUS!!) and information on a quilt wall hanging we are contemplating for the entryway in our home.


We did not take a map. I am a map reader from way back, but our car now has a GPS system built in, and it seems to perform very well. I love reading maps, and discovered yesterday that one advantage to a printed map is that you can look at "the big picture" more easily than you can on GPS. But, we left the map at home, forgotten in our rush to get going earlier in the day. When it was time to come home, we set the GPS for our home coordinates, and a route was almost instantly plotted out. Actually, GPS gives two routes, one that is the shorter distance and one that is the shorter time. We chose the shorter distance, and off we went... it all was working fine till we came upon a sign indicating there was a bridge out ahead that the GPS did not have in its data banks. Refiguring a route around the bridge proved to take more knowledge than I had, but I fiddled and fiddled. Finally we had a route figured out. It was the shortest distance around the bridge route. However, our GPS system, (whom I have nicknamed "Margaret"-- my first car was named Margaret and since this has a woman's voice, I of course thought of the name right away...) does not understand the difference between good gray roads and really, really awful ones. Too narrow, no berm, many potholes... At one point we were actually on a frontage road that drove for miles next to a divided highway... <sigh>

Thank goodness for daylight savings time, as we ran out of daylight about 3 hours into our 4+ hour trip home. By the time we couldn't see where we were we were close enough we could figure out the route ourselves. And we did indeed "Wander Indiana"!!

And here are some interesting facts I learned along the way:


Well, here's to wanderlust, whether it be in Indiana or elsewhere. And to warm spring days!  I hope everyone gets the chance to enjoy the spring weather in whatever way brings a smile to your face!
Posted by Barb at 9:20 AM 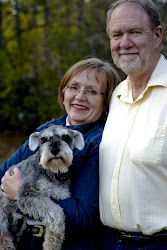 Myself, the love of my life and our doggie Siggy

Barb
Retirement from nursing has provided the gift of time to pursue creative interests, including a stab at writing. Archiving such musings may also provide my grandchilren with more insight into who their grandmother is!